The SJHL put on their 2018 showcase over four days from Sept. 23-Sept. 26, providing ample time for their players to strut their stuff for the fans and scouts in attendance. The league consists of 12 teams, who each played two games throughout the week, with the purpose of promoting the league and showcasing the players who are vying for scholarships and even professional hockey opportunities.

SJHL President, Bill Chow, believes it is an important event offered by the league. It provides players with a chance to further their hockey careers after junior hockey, but it also creates awareness for the league and allows scouts to simplify the recruiting process by seeing players all in one location. 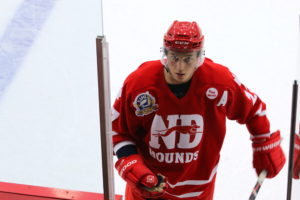 “I think it allows the players to show their talents. Obviously we’ve had a number of scouts here and it allows them to try and show their best,” Chow explains. “I think overall the level of scouts, from the NHL, the Western Hockey League, and a large number of NCAA scouts, providing them with the opportunity to see teams in one spot is attractive to them.”

When it comes to the league as a whole, offering the players the opportunity to advance their hockey career is vital. To do that requires consistently offering an event that is attractive to scouts, according to Chow.

“For us I think as long as we are doing our best to attract the scouts, which I think we have done, from comments that we’ve received,” Chow commented. “There’s always a tweak that you can do and you have to be willing to have your mind open to do those tweaks to make sure you keep those scouts coming and maybe to attract more, but I think overall success-wise I think we’re pretty happy where things have come this year and in the last couple years.”

LISTEN IN: SJHL President, Bill Chow, discusses the importance of the Showcase event.